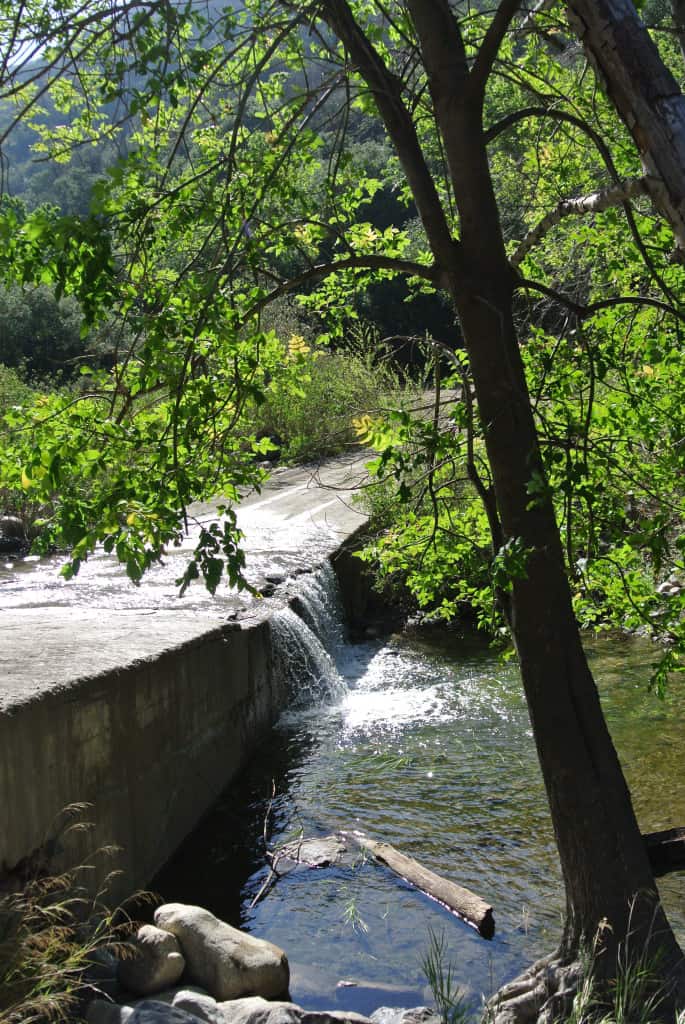 The day was sunny and cool. The riverbed was flowing from all the rain that we received from the week before. I think this is the most water I have seen in the two years that we’ve been participating in Earthroots. The trees and brush were so happy, everything was shiny and green, and the wildlife was definitely grateful for the water as well. We heard frogs talking to each other, which made for great frog hunting. Most of the kids joined in the fun of hunting frogs. 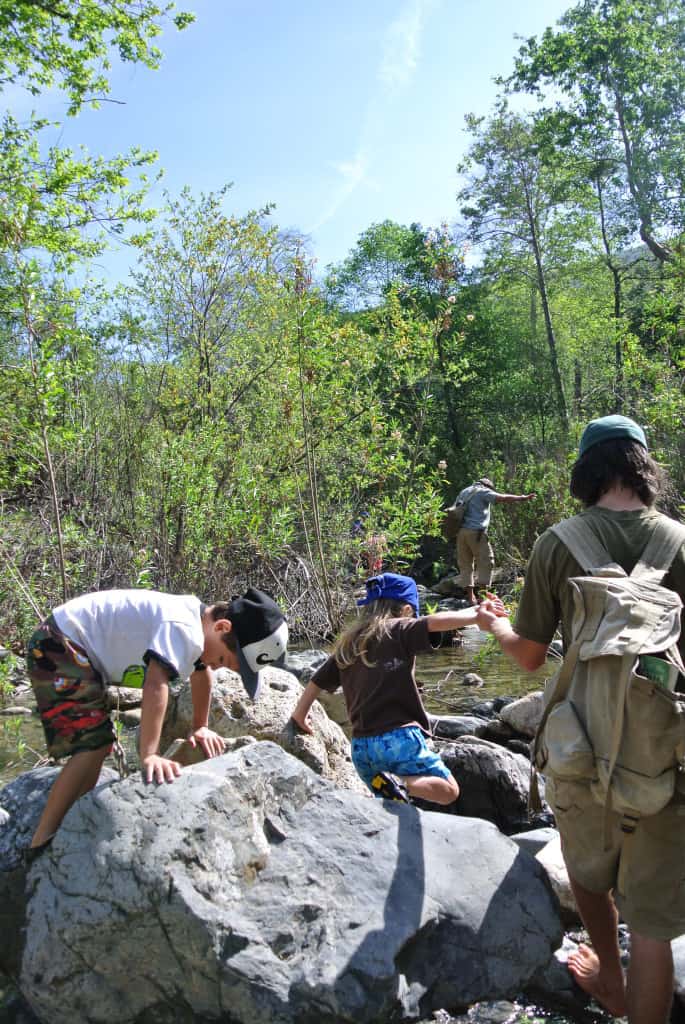 The water was cool and a welcome sensation to our feet as we scrambled over rocks and mini waterfalls to our destination. At our destination the kids went into free play. Shane showed the kids that climbing a tree is possible with your hands and bare feet. 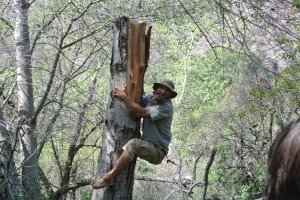 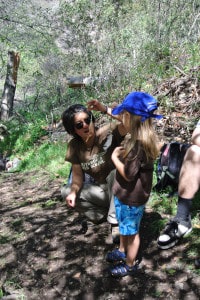 Once we settled, Jeannie gathered the kids and had them play a game of “hiding from the wind”. This game taught the kids how to find shelter from the wind in case they get lost in the wilderness. The kids each got a feather so they could see if the wind was blowing and they searched for the perfect place where their feather would hang still.

We split into 2 groups and headed off on a great adventure. Once we all found our shelter areas, we got together and inspected each area. First was Alan, Jeannie, Zen and Ziah. They found searched many places before settling on a brush that had enough space for all of them. 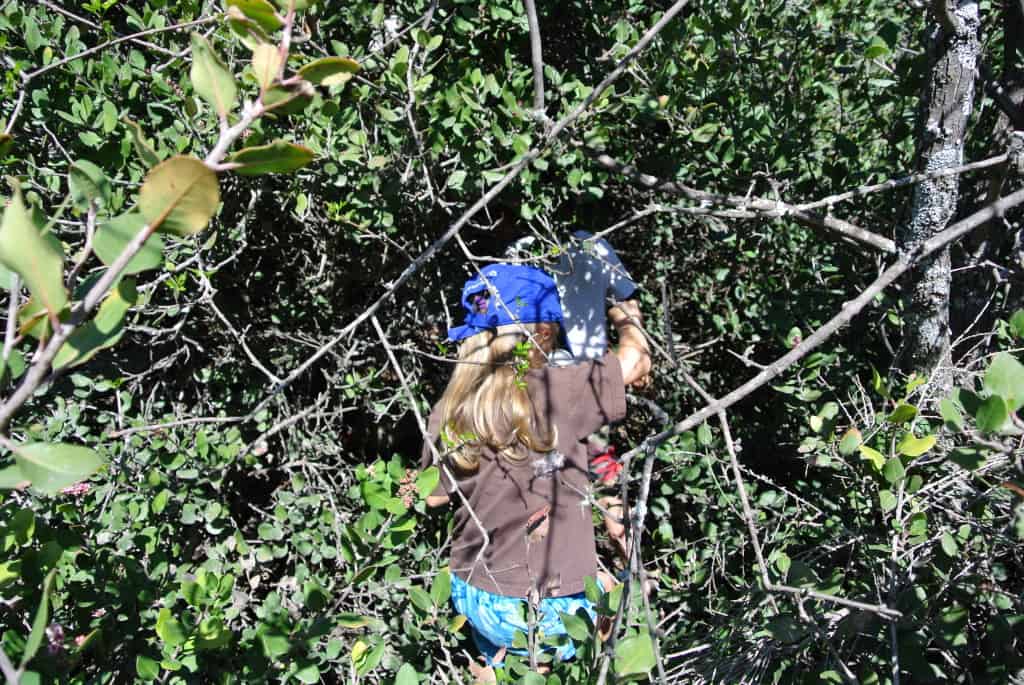 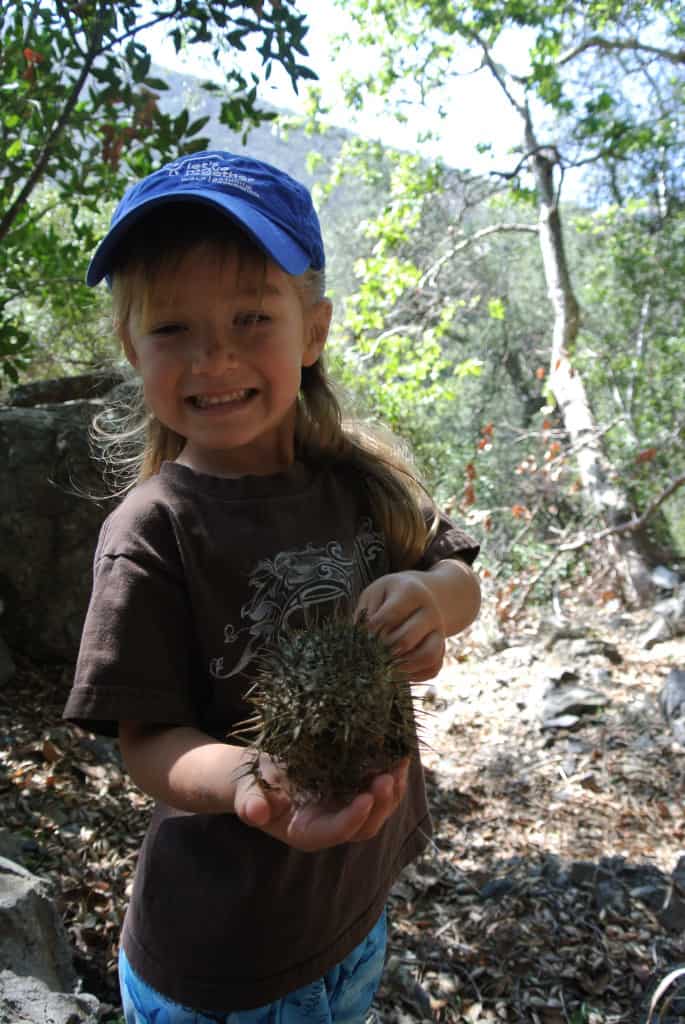 Next we happened up to Christian and Chase’s area underneath an oak tree where we found a spiny cucumber, and then Ruby’s spot. 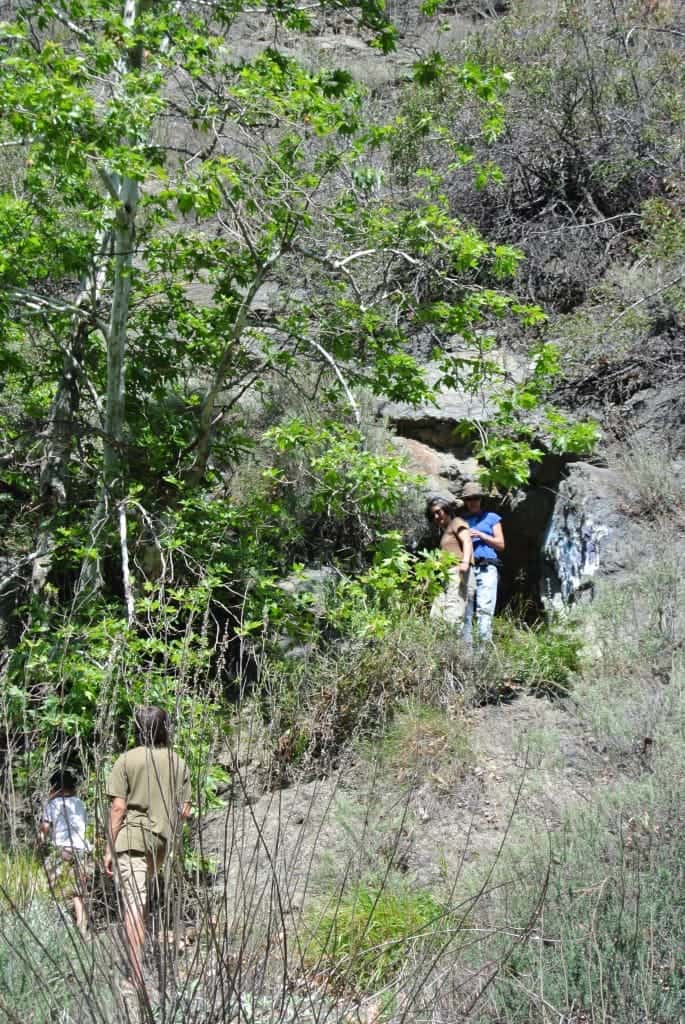 On our way back I remembered the cave resting on the hillside. Zen volunteered to go up with Shane, Jeannie and Leslie followed to see if that would be a good shelter area. The consensus is it would be a good possible place, depending on which way the wind is blowing. Needless to say, we all had fun.

As we were looking at one of the sheltered areas, we happened upon poison oak…only it didn’t really look like it. The leaves were small and green, but they were clustered in leaves of three and were really shiny. Pictured here is a newly sprouted poison oak plant. 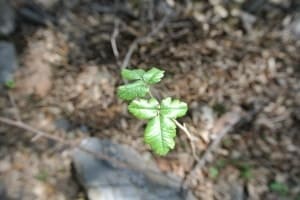 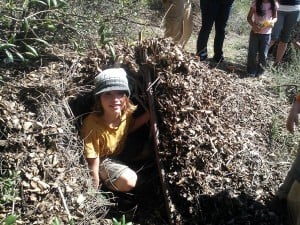 During the day, Alan told the story about two boys and their grandfather who stayed in the wilderness and had to make their own shelter. After many failed attempts and talking with the squirrles they finally made a shelter that would protect them from the wind and rain. Alan was very animated during his story telling, which kept the children entertained.

Alan then took us and showed us a shelter he built during the Wednesday class. All the kids took turns going in and getting a sense of how a shelter is built. 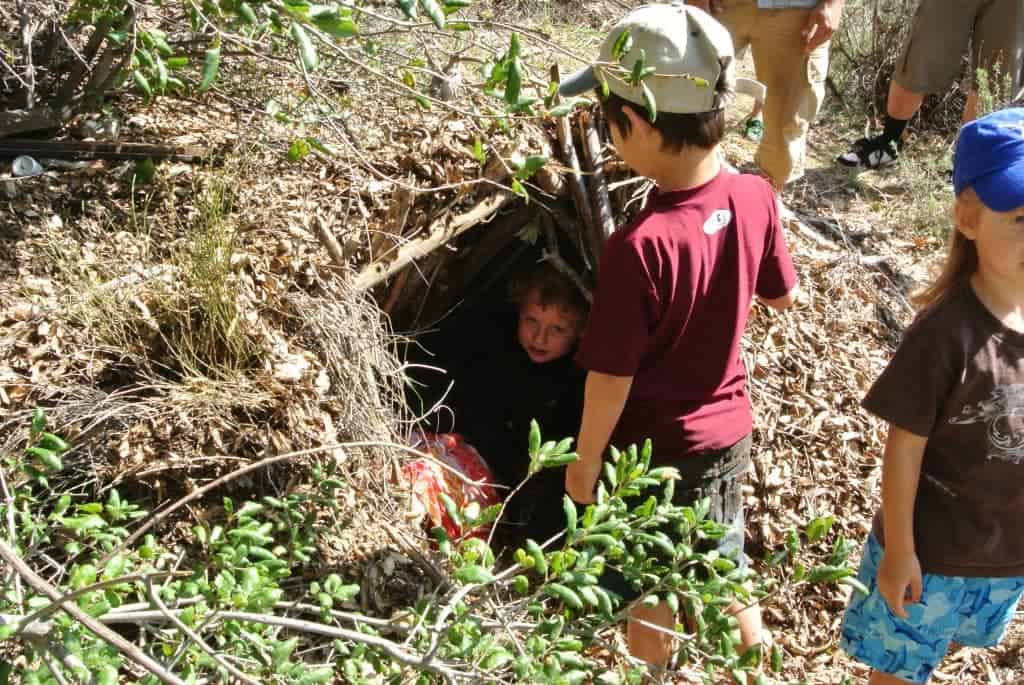 During closing circle, Shane found and harvested a plant that looks like it is part of the onion family. It is called wild hyacinth or blue dick or ground nut. All the kids and adults were able to taste it. Bryce was a big fan of it and kept coming back for more. 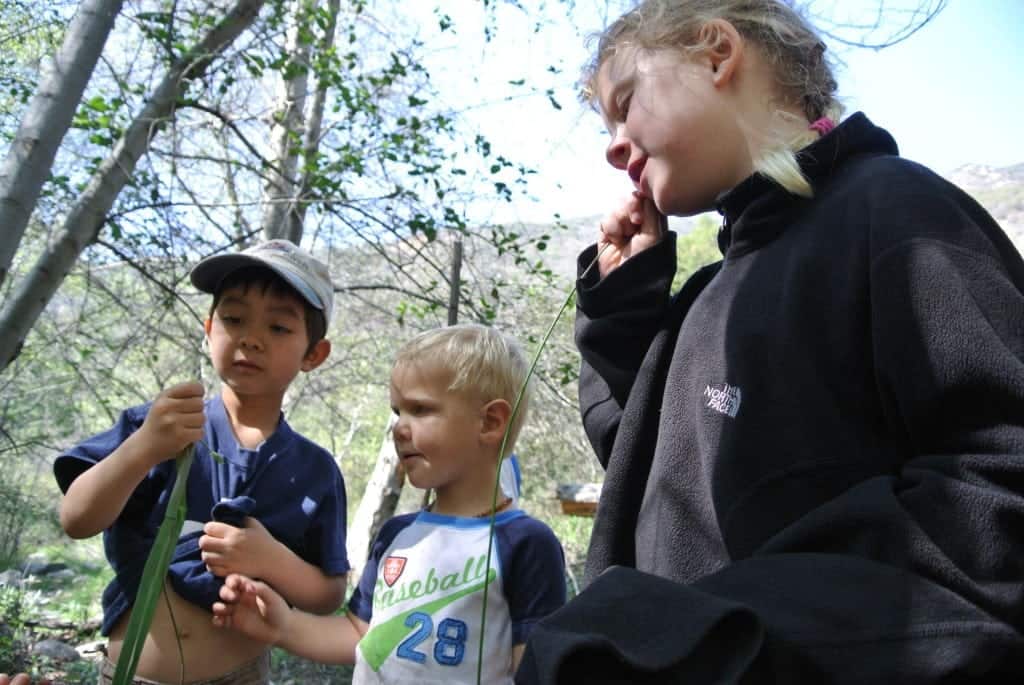 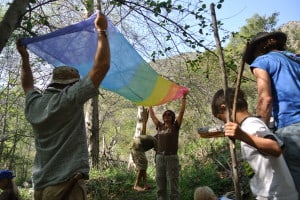 The kids were anxious to get back in the riverbed to try and catch more frogs. So we brought out the rainbow bridge and thanked our teachers for another great adventure. 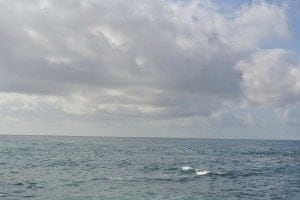 What a beautiful day at the beach. It started out cloudy and chilly, but that didn’t stop the kids from playing in the wet sand and water. Some time between opening circle and snack the clouds broke and the sun shown bright on the day.

Some kids dug trenches and built a tunnel while others ran and chased each other. What a beautiful sight, to see the kids all doing their own thing. Running care free and exploring on their own terms. 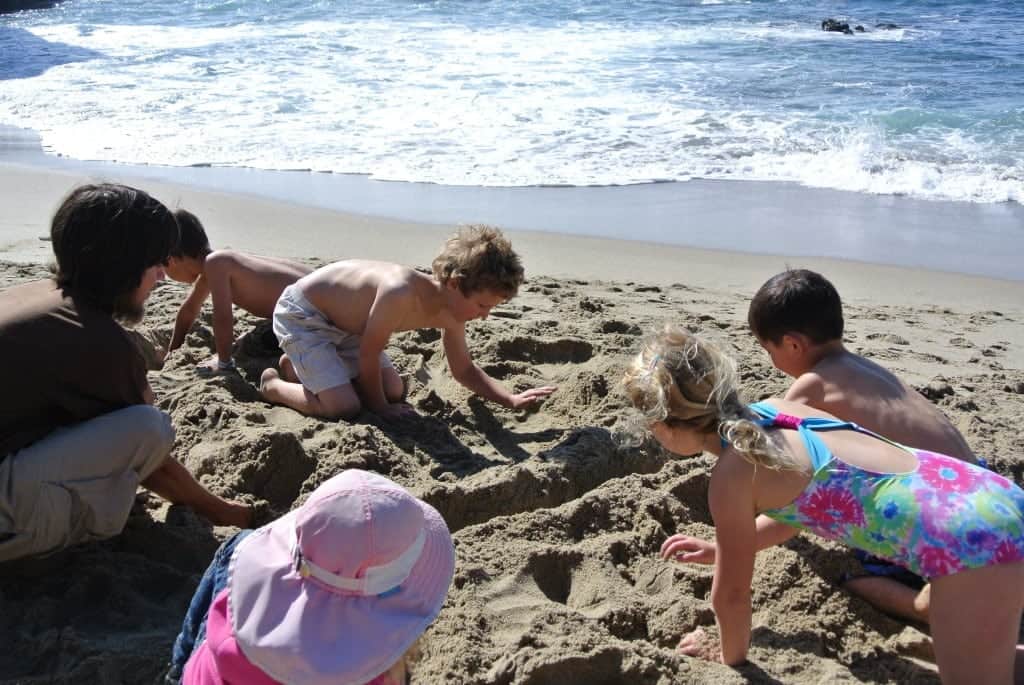 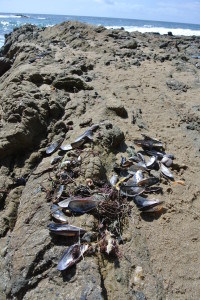 Jeannie then slowly got the kids interested in exploring the tidepool, especially since the tide had gone down tremendously. While there, the kids found and collected sea treasures and piled them at the edge of a rock. In the tidepools we saw lots of sea anemones and hermit crabs.

Before lunch the kids played a game. The game is kind of like rock, paper, scissors, butinstead of using hands, the kids used their whole bodies. It was human, otter, sea urchin. There were two teams and safe lines. The teams stood toe to toe and at the count of 3, they would show their sign. It was really funny to see the pause while they each figured out weather they were running away or doing the catching. If they were tagged before they got to their safe line, then they were on the opposite team. They played a couple of rounds before the hunger kicked in. 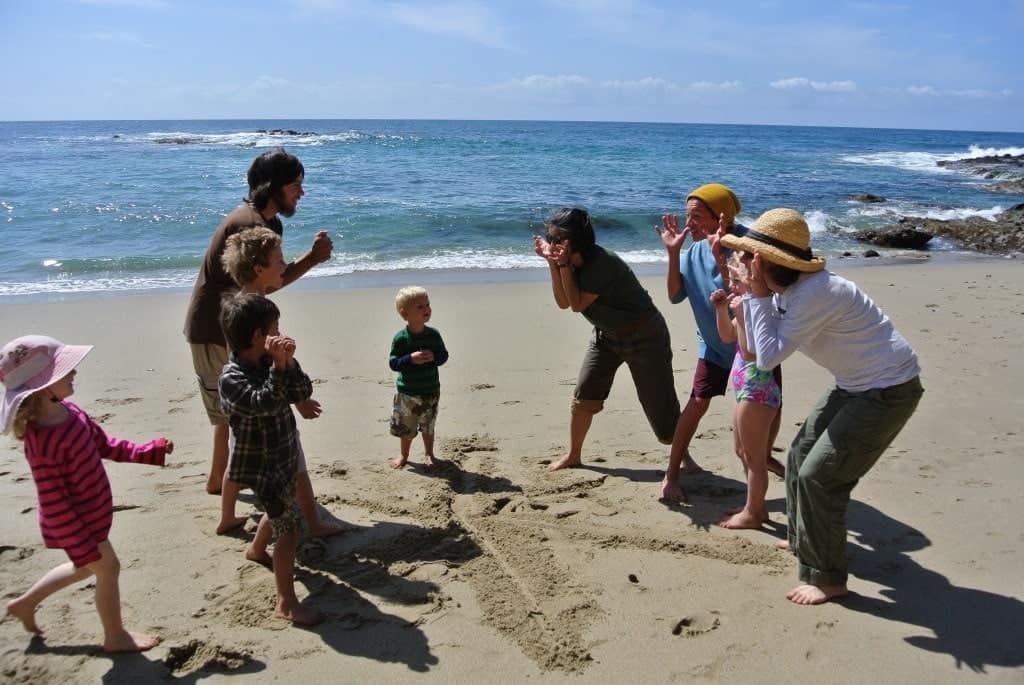 After lunch Jeannie suggested they make paint. Paint at the beach, really? Yes really. There was a rock wall that was covered in a yellow powdery substance. 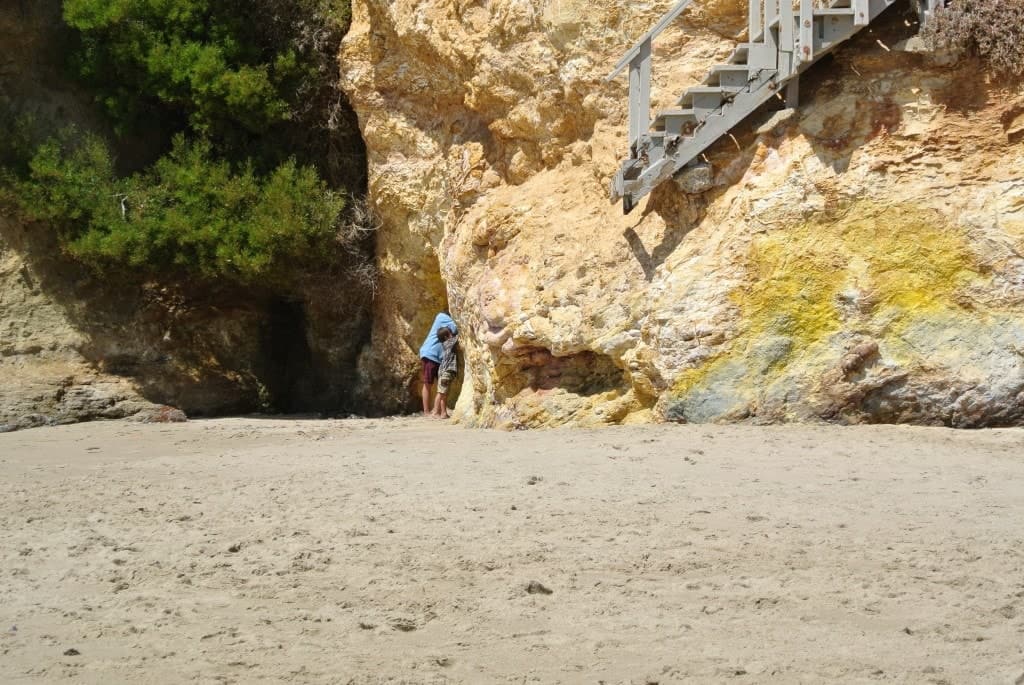 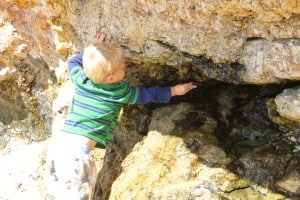 The kids scrapped it off with rock or shell and collected it in another shell. Then they used brazilian nuts to add texture to the powder and added water, which was graciously given to us by a weeping rock next to all the powder. 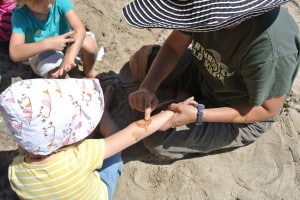 The kids mixed and added more powder until they had the color and consistency and then proceeded to paint themselves. It was a great time. A few of the kids had an adult paint their faces and most painted their arms and their bodies. 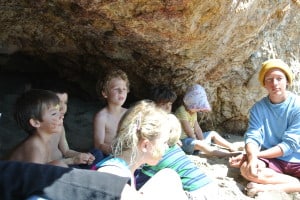 Then it was story time where we heard Jeannie tell a story about Eagle Boy. A boy who found an eagle and cared for it, and eventually was allowed to join the other eagles in the air until he disobeyed the eagle elders and was sent back to his family. A tough lesson to learn for him, and the kids were hanging on every word. 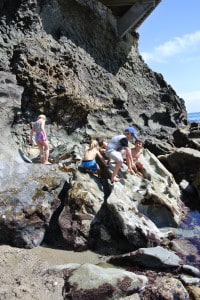 It turned out to be a beautiful day. On days like today the kids like to hang out after class and explore some more. Here they are in their water boat.

We even got to see a snowy egret hunt and catch food. 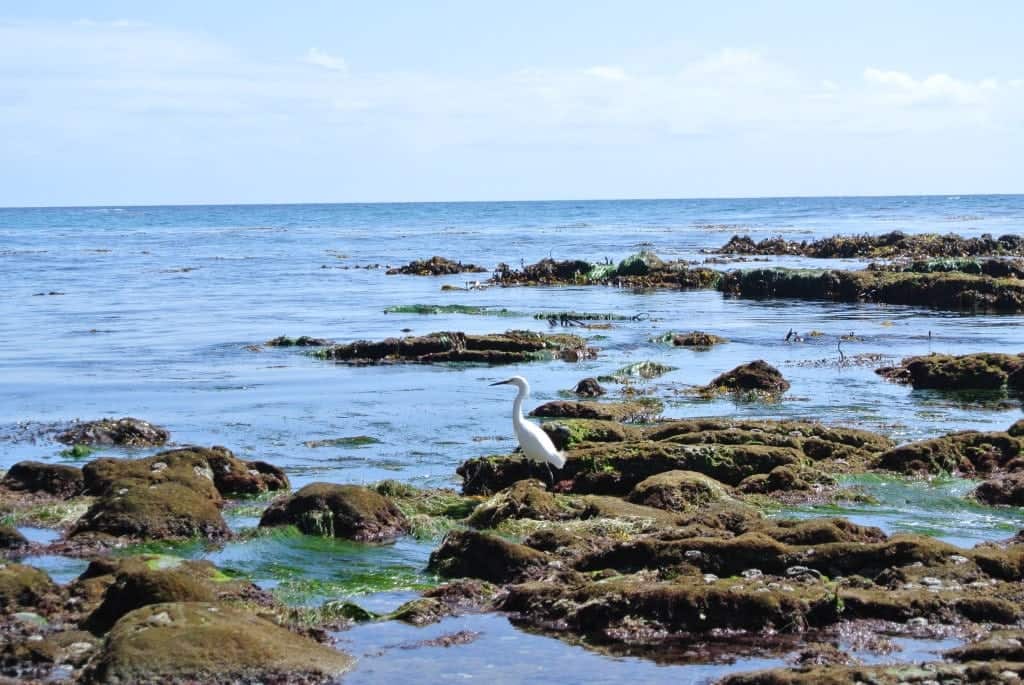