I haven’t made a blog post in a few months, since my rhythm like most people’s rhythm has changed, so this one will include some highlights from the past few months. I hope it gives you some pleasure and laughs.

“Rattlesnake, we see how you’re enjoying the shade, and how you recoil when we approach, and how you raise your 6-segmented rattle which tells of the number of seasons you have lived, but we just need to get into the car.”

“Hey, I think I saw you here last year. Do you have any tales to share from your trip to the Central American highlands?”

“Yes, hang around here a while and eat as many of the bugs as you can, You’re gonna need it for your long journey, wherever you’re going next.”

“So, was it too big to swallow the first time, but you’re going to try again anyway?”

Sitting out at Big Oak on a summer day, I suddenly hear a loud scraping noise. I turn around and see little crumbs raining down onto the dry leaves under an oak tree. High up in the tree a fox squirrel climbs out onto a narrow leafy branch, snags a gall, and retreats to a thicker limb to tear it open with long, sharp front teeth designed for just such a task. I have never tried the grubs, the larvae of the oak apple gall wasp, whose mother laid her eggs in the branch in springtime, inducing the large, spongy growth. Tell me, squirrel, if you find some tasty grubs and if you like them as much as the black walnuts you were eating last year.

I’ve been learning a lot about making compost in the online school that I’m attending, called the Soil Food Web School. With some help from volunteers, I attempted my first batch of “biocomplete” compost, using tree trimmings, green plants, weeds, and wood chips from Big Oak, and local goat and rabbit manure. A month later it looks pretty good, but it might take a few times of adjusting the recipe to get it just right. This will be used for enriching the soil in the orchard and gardens at Big Oak.

Making use of abundant local resources (that may often not be realized as resources) is key to sustainability and resilience. This will be my second straw hat, using the golden wild oat straw that grows so abundantly all over the hills of California. On this one I’m going for a flat top and a wide brim.

This drum has a story. (All things have a story, but I happen to be very connected with this story) If you have read my previous blog posts, you may recognize the log. Last winter the Forest Kindergarten class found a bee hive in this naturally-hollowed (rotting from the inside) sycamore log that had just fallen from the tree. We were able to observe inside the hive and saw that they had a lot of pollen or “bee bread” packed into some of the cells, and some larvae in other cells. Some people got to try the bee bread, which tasted strongly of sagebrush, which they had gathered pollen from in the fall. Later, the bees all died from an unknown predator.

One day, I was reading about some of the technologies of native peoples of California and I came across something that mentioned a two-headed sycamore log drum. I had some old animal skins lying around, thinking that someday I would use them, but I don’t often get around to such projects. I have enough projects and enough instruments, after all. In 2010 I attended a nature connection camp as a teenager, and I attempted to make a hoop drum there with a deer skin. The wooden hoops I made turned out to be too flimsy, so the drum didn’t work, but I kept it and have been dragging it around with me ever since. I also had a skin from a goat I butchered.

I walked by the fallen sycamore log again, and it was too good of an opportunity to pass up. I cut up the log into several sections, saved one for a birdhouse, one for an educational display of a beehive, and this one for a drum. I chiseled away the bark and some of the rotten wood on the inside to clean it up. Then I got out the old skins, soaked them, cut them into shape, poked holes all around the edge using a nail and hammer, and used what was left from the deer skin to cut a very long rawhide strip to string the drum together. I put the two drumheads on and started stringing them together going back and forth between the holes on the edges, and pulled the string tight. As the skins dried out in the heat of the day, they shrank and tightened so much that the string broke all the holes in the drumheads! I had to do it all over, this time punching the holes farther from the edge and not pulling the string tight at the end. The temperature and moisture in the air affect the skins so much that in the middle of a sunny day the sound of the drum would be so high-pitched, while on a cool, cloudy morning the drumheads were so loose that the drum was un-playable. I inserted these little pieces of elderberry branches under the strings to function as a tightening mechanism during those cool mornings.

It’s been over a month now, and I drum every day. In fact this is the only thing I have ever done that I would consider a “practice” that I have done every day without fail. I’ve tried to have daily practices of running, stretching, meditating, sit spot, etc., but always end up feeling like those are just things I “should” do. Now, every day I wake up and I want to pick up the drum. I go sit out on my rug and start playing some rhythms. My heart is fully in it, with no resistance or feeling of “should”. Like the birds, I face the sun and begin to sing as well. I mostly don’t have any words, but I sing and play to the sun, earth, water, air, plants, animals, ancestors, and the people alive and those yet to come, loud enough that they can hear me. It’s the moment when the rhythms of Earth and ancestors flow through my hands and voice when I feel the most alive, free, connected, and hopeful. Like the drum, each person has a lot of threads of connection, which, when realized and tapped into, can lead to beautiful things. I don’t know if it’s just me playing a drum, or if Big Oak played me to hear the sound of a sycamore drum. 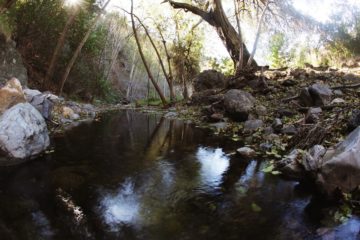 Heidi Lucero, member of the Acjachemen and Mutsun Ohlone tribes of California is interviewed by Karen Graham, Curriculum Development and Community Liaison for Earthroots Field School. Heidi is an anthropologist, culture bearer, and an educator Read more…

By: Stacey Stormo When I was a kid and anyone asked me which animal I’d want to be, I’d always say I’d want to be a butterfly. They’re beautiful, they can fly, they come in Read more…